A few months ago, my best-est friend came down for a glorious 11 days, and we explored the nation’s capital like tourists fresh from another part of the world.

Our gastronomical adventures (not all in one day!) included nibbling on cupcakes, sampling divine Stubbe chocolates, feasting on the most amazing pizza at The Grand, and paying a visit to Smoke’s Poutinerie for some of Ottawa’s finest cheese curds and gravy on fries. 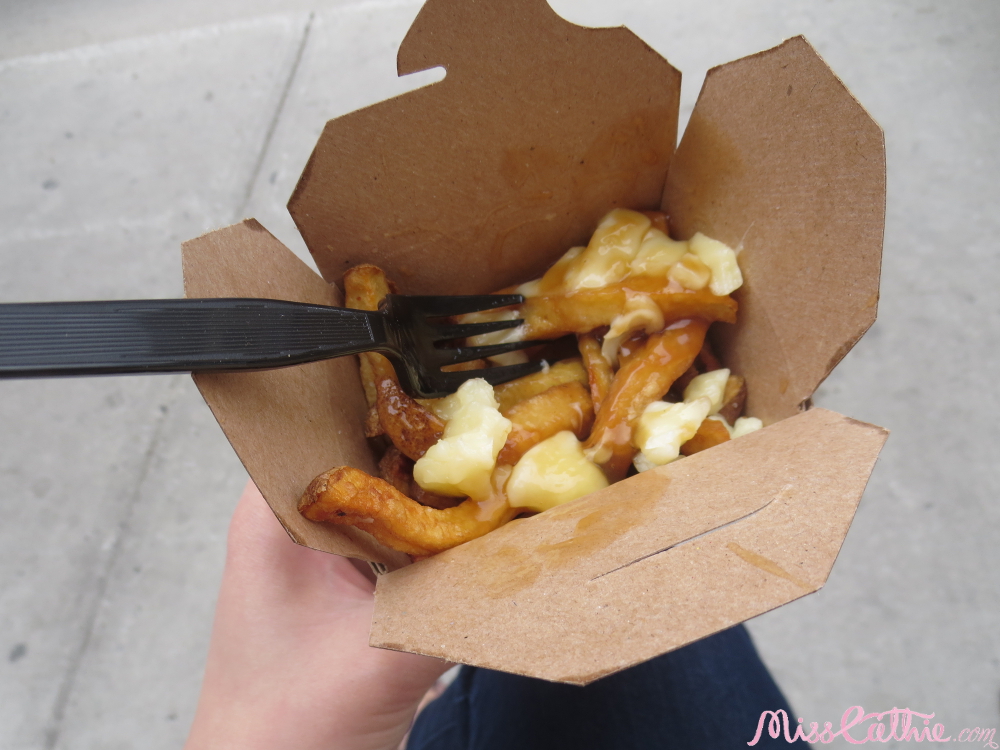 Smoke’s, by the way, is a very tiny establishment and is almost always full.  It was a beautiful day outside though, and em and I were more than happy to take our poutines to the street and people-watch while we indulged.

We also wandered around the ByWard Market –which extends extensively around the main building itself.  I’m not sure that I’m describing it as accurately as I would like, but it is a sprawling conglomeration of boutiques, salons, restaurants, bakeries, produce, meat, and cheese stands, etc.  that spans across several streets.  This is my impression based on the numerous ByWard Market signs that we encountered far from where we thought the market would have already ended!  You cannot compare this to the Granville Island Market.  There are similarities and differences, and each has its own distinctive flavour, but neither is ‘better’ than the other as I have heard some people hotly contest.  They are both interesting experiences to be appreciated in their own right. 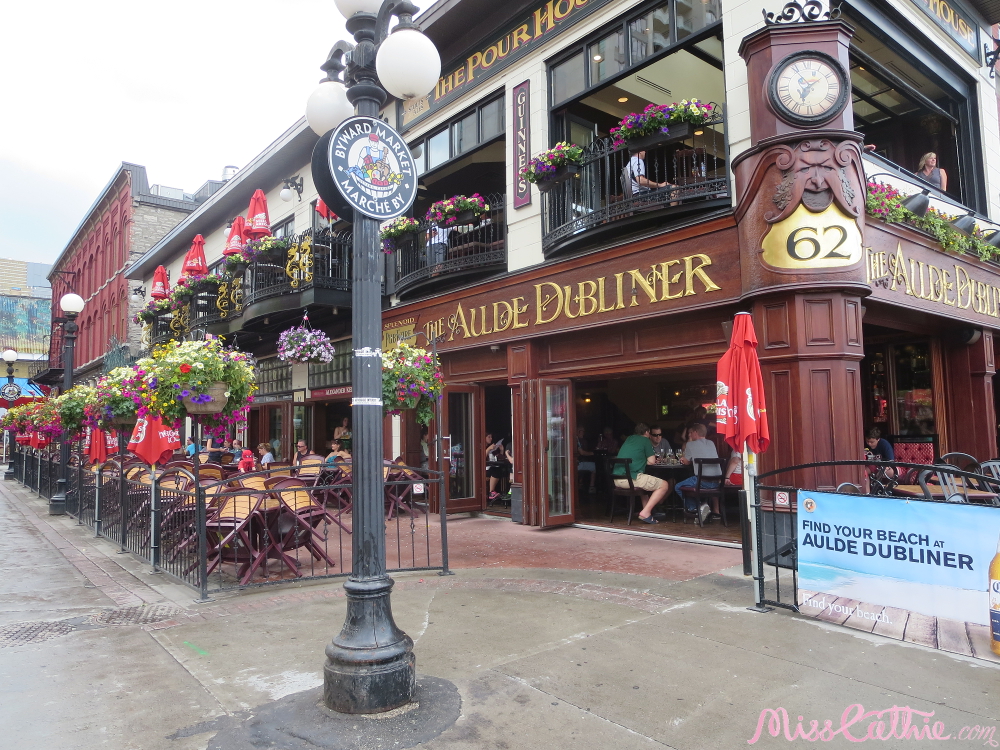 We had supper at The Aulde Dubliner, which was opened in 1992 by two Irish immigrants with a big dream.  I forget what em had, but I had the most comforting French onion soup imaginable. 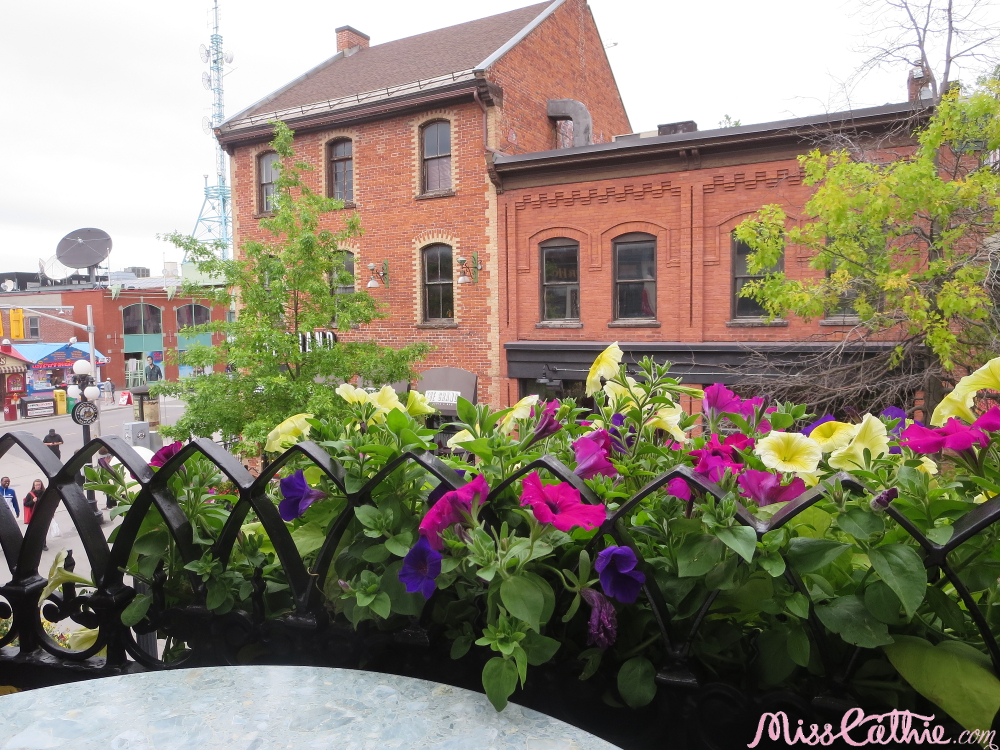 It was a cloudy, slightly damp day with a brisk breeze.  I insisted on sitting outside on the balcony for the view but we finally went indoors.  In a sterling case of poetic justice, em who wanted to sit indoors in the warmth, remained hail and hearty.  I took sick after a few days.  In my defense, there was that one evening where the skies absolutely poured and we were caught in it for hours –I with nary an umbrella. 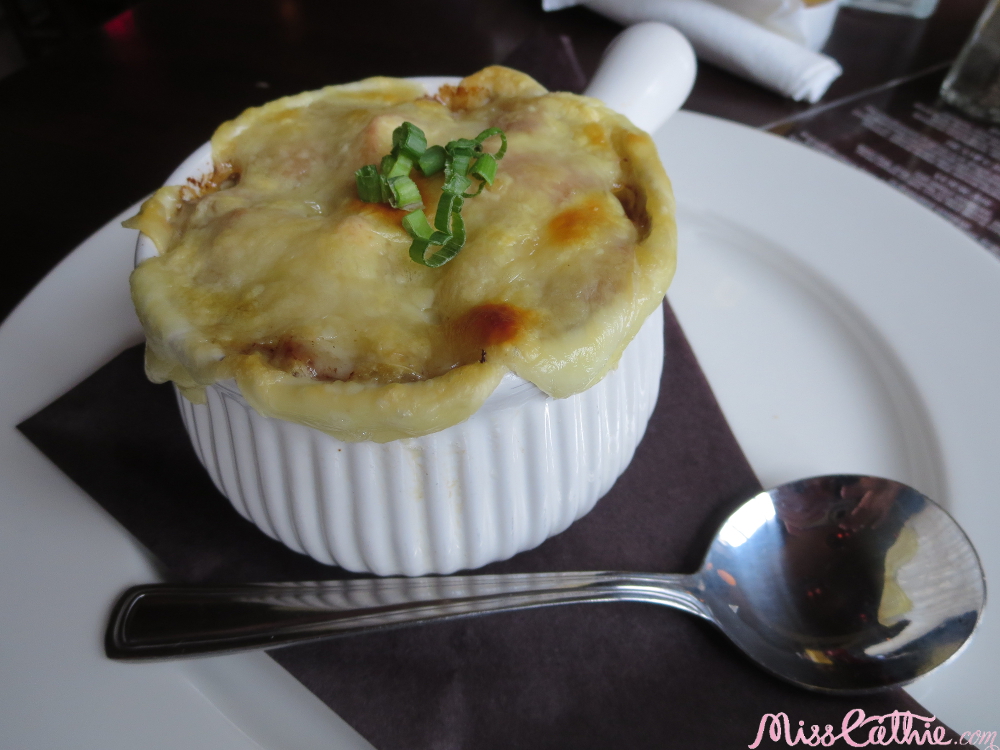 We also stopped by Thimblecakes, and I tried one of their Ugly Ducklings, which is to say, less than perfect cupcakes that they would not sell at full price, but are still too delicious to toss. 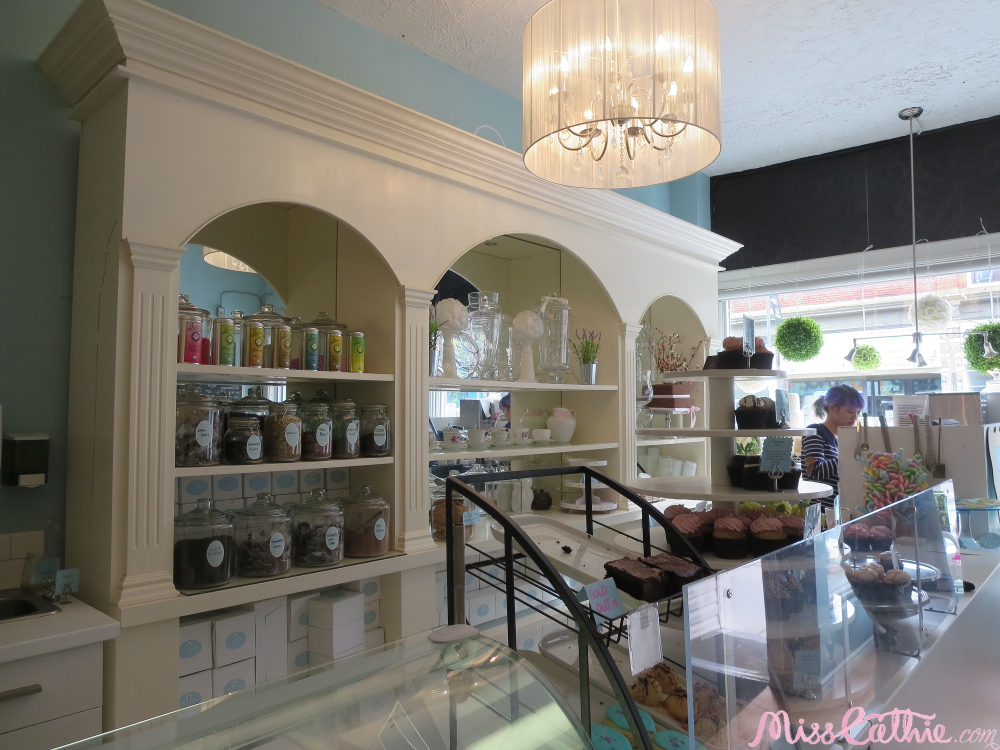 The one I had was incredibly dry and lacking in taste… and I’m not certain whether it was because it had been an Ugly Duckling for quite a while, but I was not very impressed.  The decor of the place was elegantly decorated however, and I could be easily persuaded to give them another chance and try a perfect cupcake if I were to pass that way again.

Now before you begin to wonder at our endless appetites, we did have other sights and interests that we pursued in our fair nation’s capital! There were paper shops…

…which begged you to reconsider the notion that paper could ever be ‘plain’ or ‘boring’.  In fact, I’m quite positive they made me feel as if one could gather together a tasteful collection of paper, wrap it in yet more, and present it as a very suitable and exclusive gift. And there were statues!  There was one of Galahad, erected in front of Parliament to commemorate the heroic but unsuccessful attempt at saving a Miss Bessie Blount.  Then there was this scandalous sculpture of young love, sitting on a bench and engaging in a subtle –yet public!–display of affection!  I own I did not know where to avert mine eyes to… 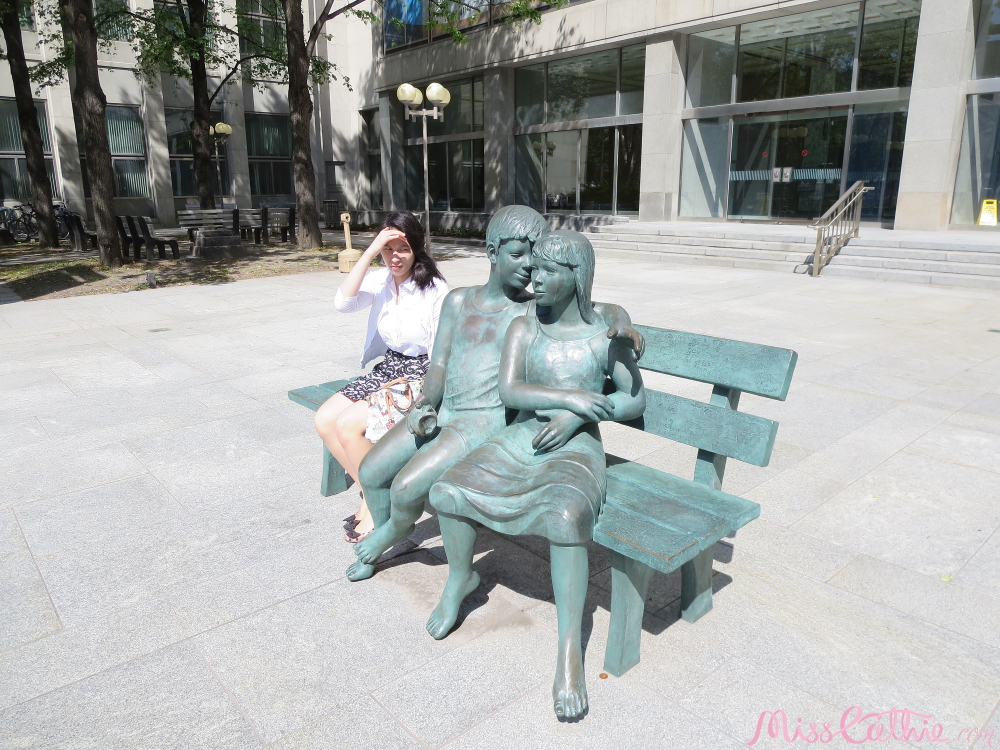 We stumbled upon exquisite beauty in Nature… 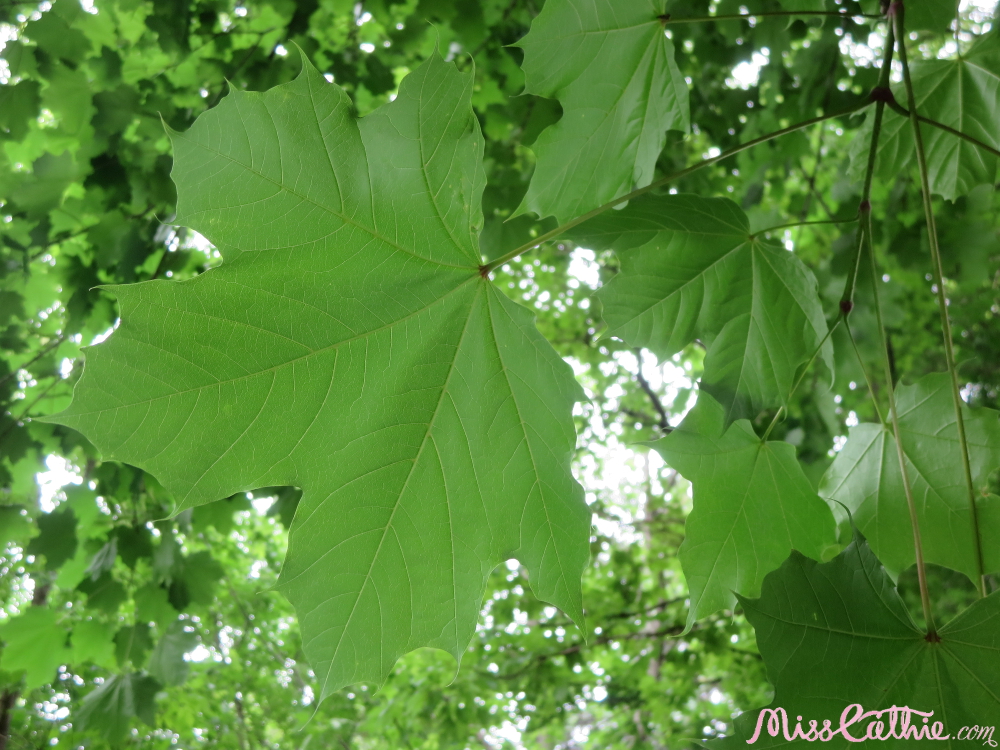 …and revelled in it. 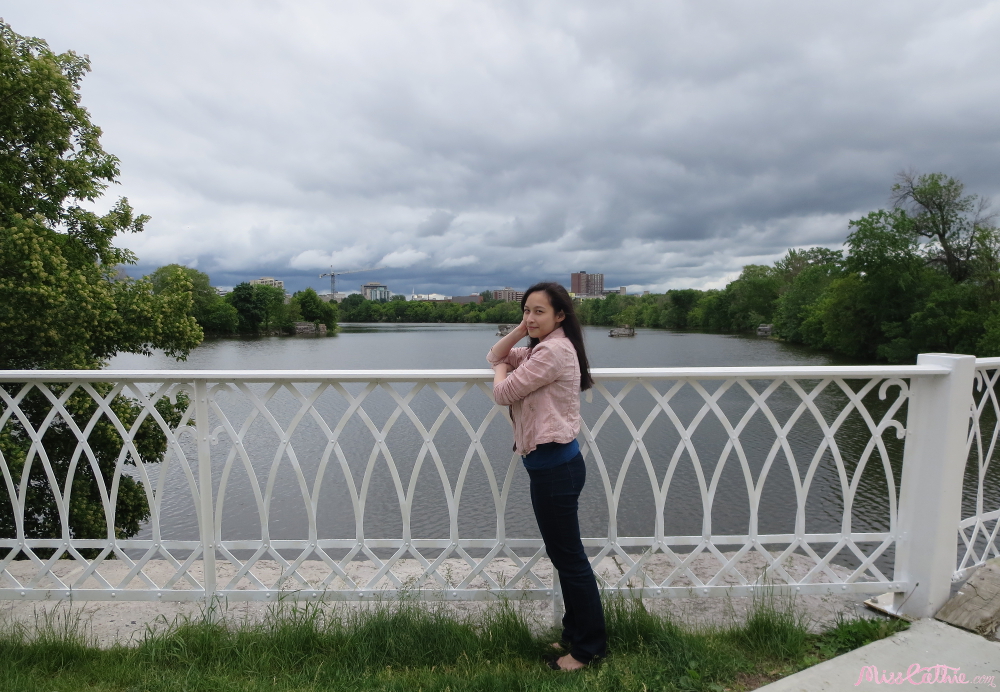 We took a tour of the Supreme Court, and sat in on discussions in the House of Commons and the Senate, which I arbitrarily insisted on calling the House of Lords, simply to rile em‘s anti-monarchist sensibilities. 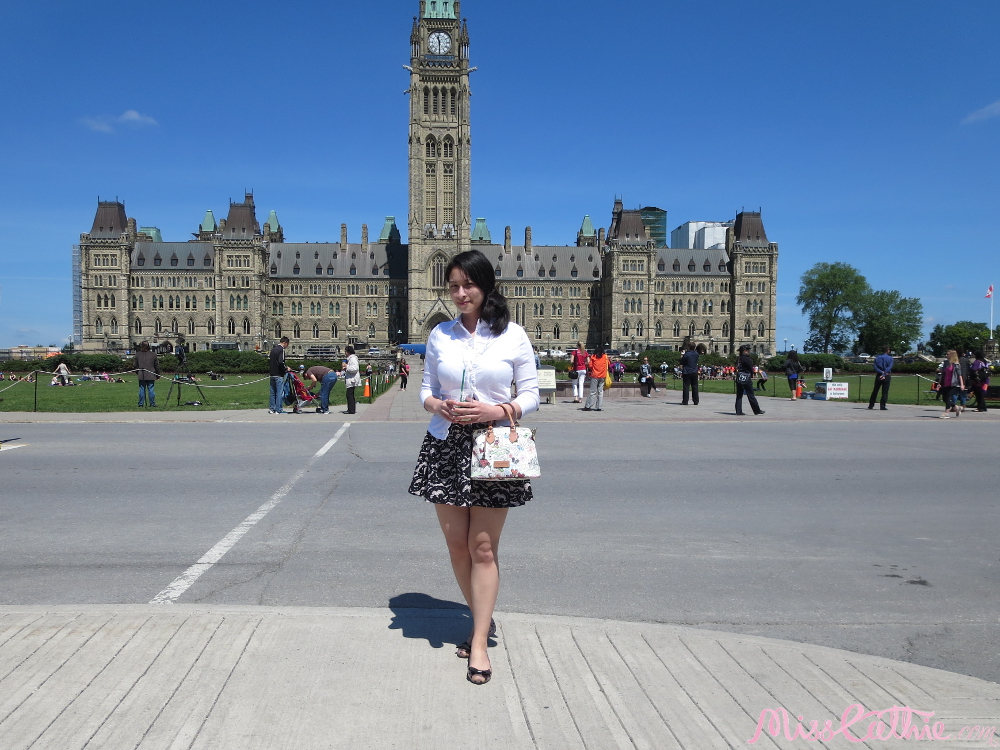 I suspect I only managed to irk her merely due to my inaccuracy.  I am, without a doubt, the best friend a girl could have. 😛 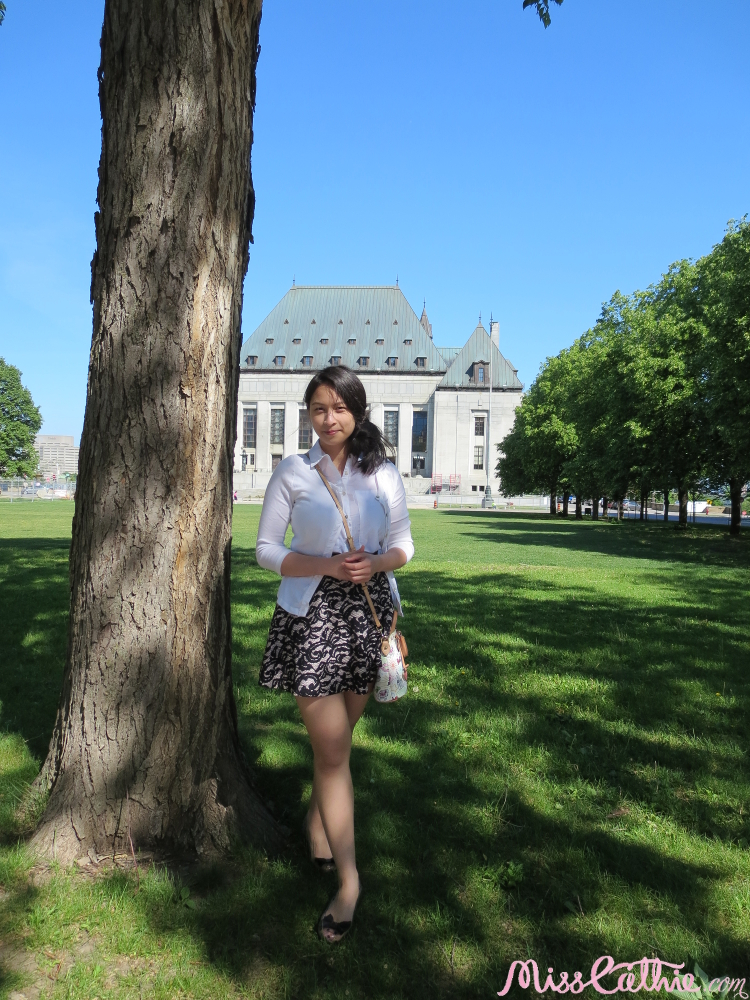 Afterwards, we went to Parliament, which is a beautiful, stunning building.  If this edifice is capable of inspiring awe in me, I can only imagine what the ancient castles and buildings in Europe will do. 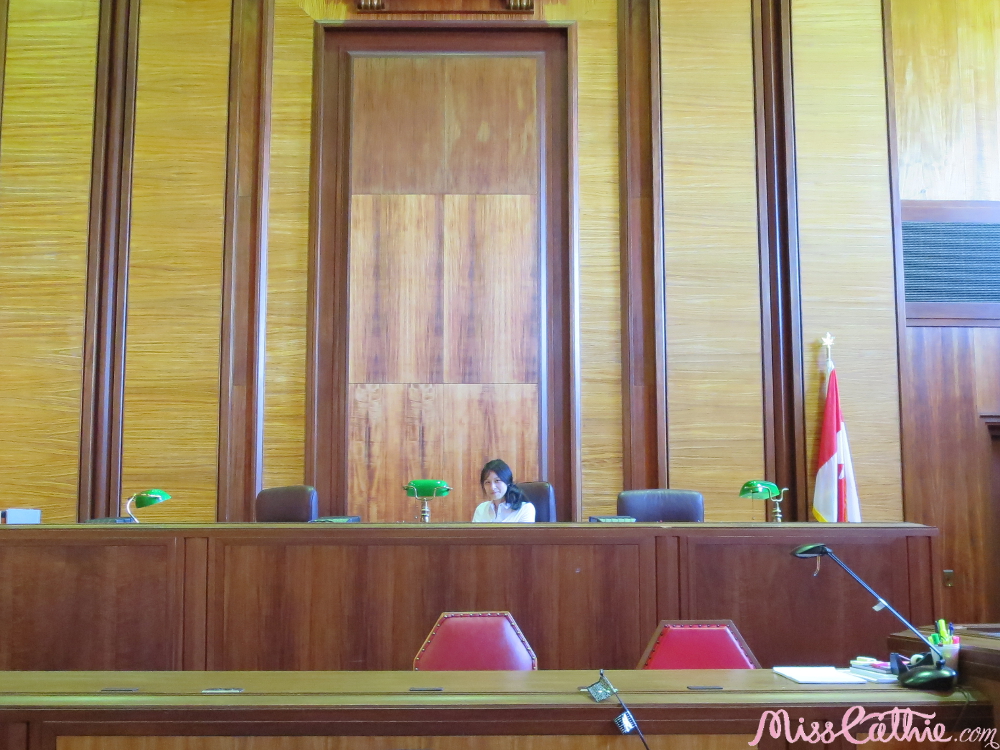 I sat in a judge’s seat… 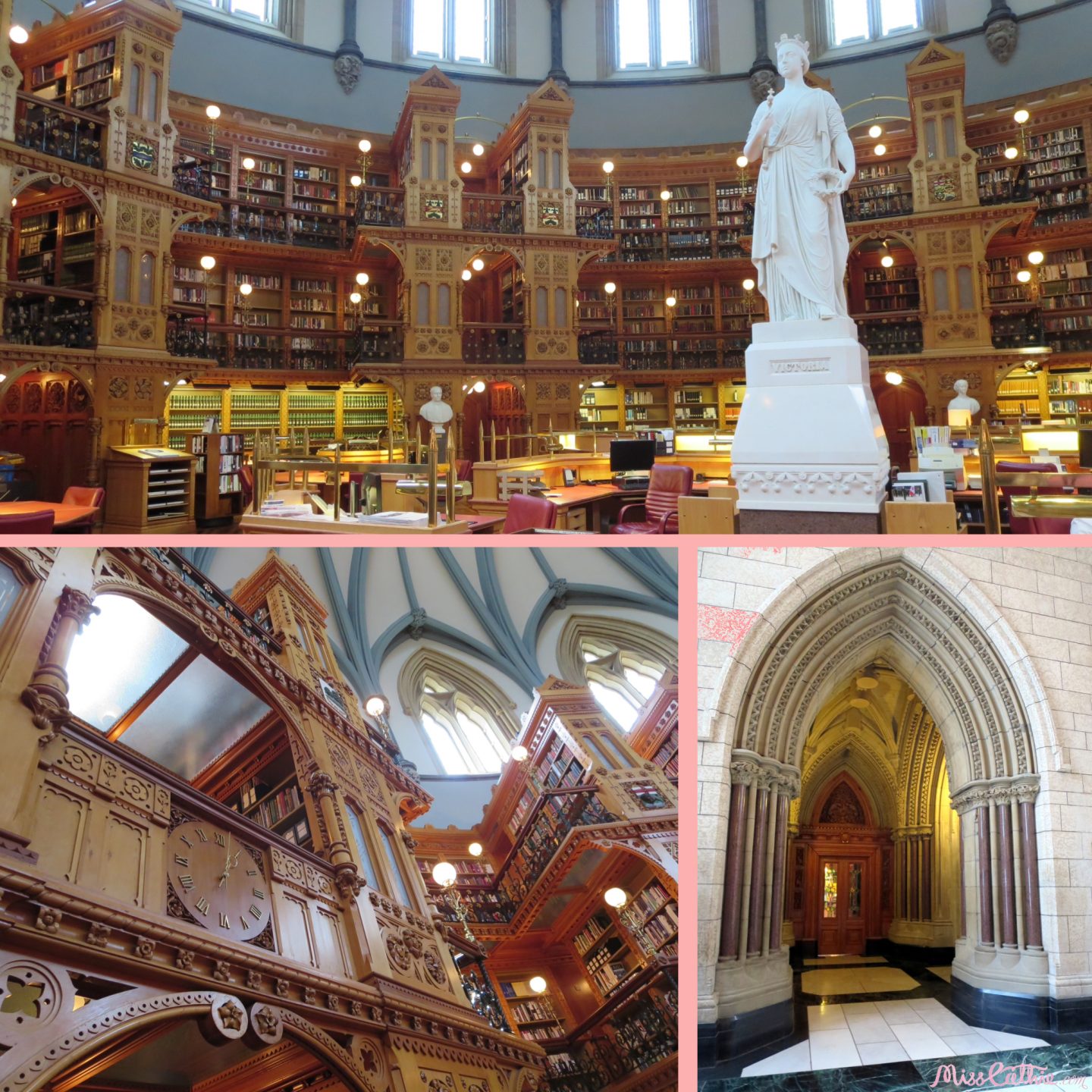 My favourite part of Parliament was the library, of course!  It was built in the Victorian era, and survived a heavy fire in 1916.  This disaster was caused by a cigarette that hadn’t been put out properly, and the library was only saved due to the quick thinking and actions of the librarians, who closed the heavy iron door leading to it.  This is why you will notice a difference in architectural styles between the library and the part of the building outside of it.  I can’t remember anymore whether the entirety of Parliament burned down, so I’m not sure whether the rest of Parliament is also part of the newer rebuilding completed in 1920. It is a very warm, bright atmosphere, and reminds one immediately of the library in Disney’s ‘Beauty and the Beast’.  I could have stayed in there for a very long time, except we were unceremoniously shooed out of the place after not even five minutes!  This of course, went into a comment card with the polite suggestion that if the library only had one actual patron in it, surely a group of very quiet and well-behaved tourists could tiptoe ’round for a little while longer! 🙂 We then visited the Memorial Chamber, which is at the heart of the Peace Tower… 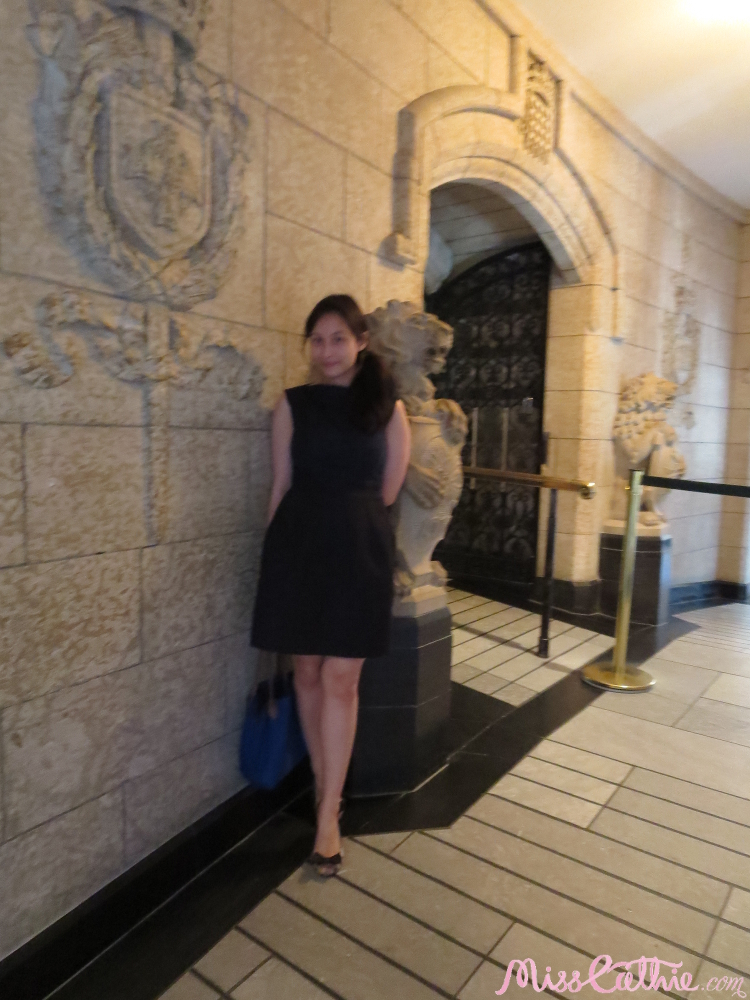 It was originally built to honour the fallen from the Great War (WWI), but has since evolved into a memorial for all Canadians who have died serving their country in war and peace, since Confederation. 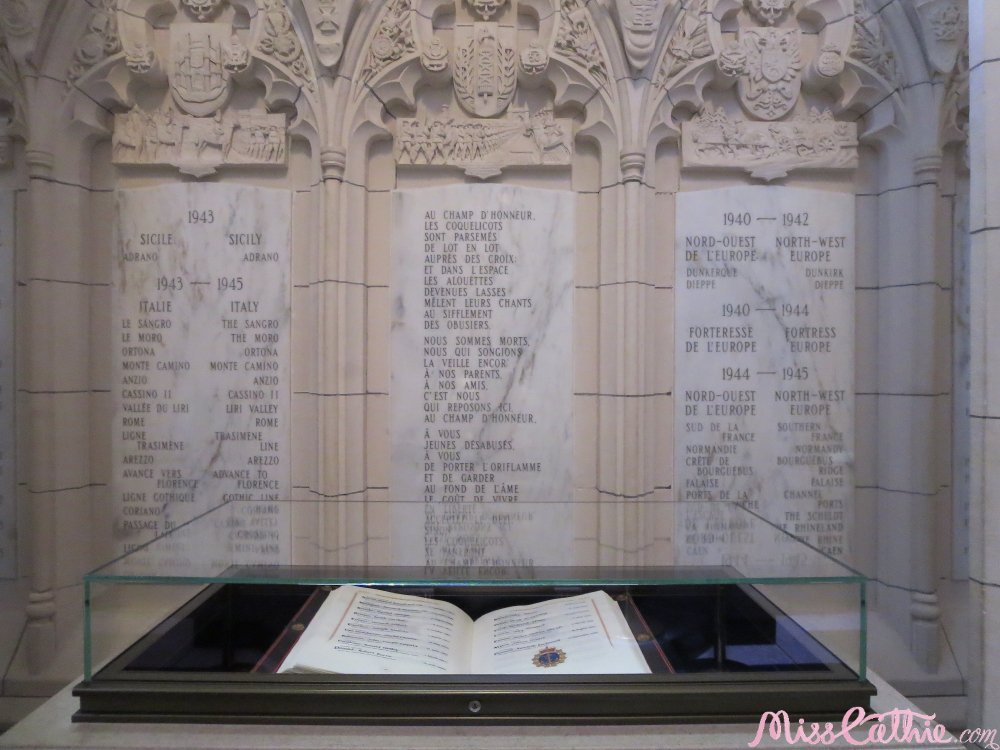 There are several Books of Remembrance, with the list of all known Canadians who have died in service.  The pages are turned every morning at 11:00, and there is a special calendar that ensures that each page of every book is displayed at least once during the year. The Peace Tower itself is a bell and clock tower, and you reach it via a golden elevator.  I believe our guide mentioned that the golden ‘leaves’ on the ceiling was the number of Canadians who had died in service.  I can’t seem to find this information on the internet to verify, so please take this ‘fact’ with a grain of salt. 🙂 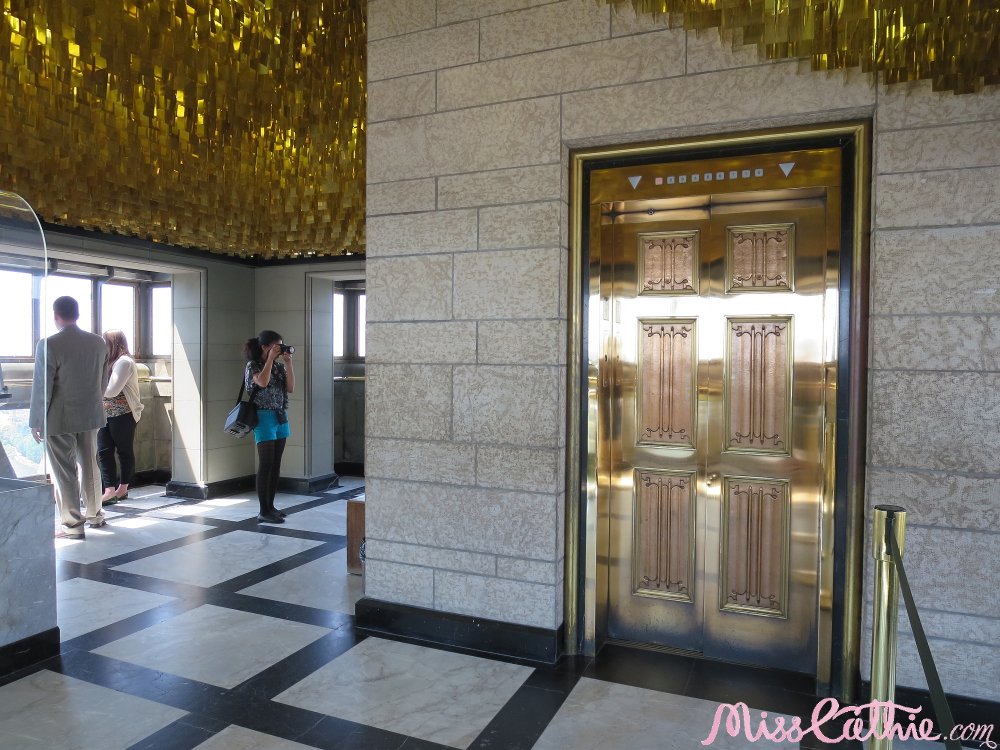 There is a picturesque view of the Ottawa River and the surrounding area from the Tower; it is not to be missed!

We also saw the procession for an opening session of Parliament… mace, tricorn hats, and all!
One must retire for refreshments, and we went to the incredibly elegant Moscow Tea Room.  They serve “award winning teas, small plates, pastries, charcuterie & cheeses, vodka, craft cocktails, champagne & caviar all within a sumptuous décor filled with art.  Whether you are looking for a tea, coffee, a business lunch, martinis with the girls, make a great impression during a date or just have a great evening in a lounge, Moscow Tea Room has it all.” 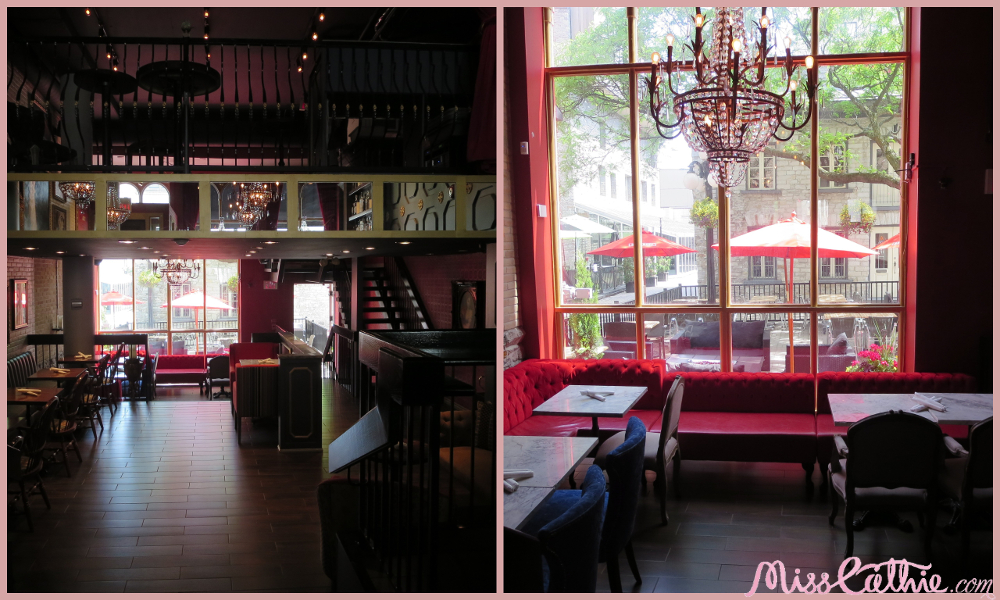 We tried the Vladimir Poutine, which is a dish comprised of potato and three cheese perogies, pan seared with caramelized onions and topped with beets, goat cheese crumble and spicy vodka sauce.  The combination of textures and flavours was comforting, yet new and delightful.  For anyone who doesn’t like perogies, do not let your experience with those frozen ones you buy at the store deter you! 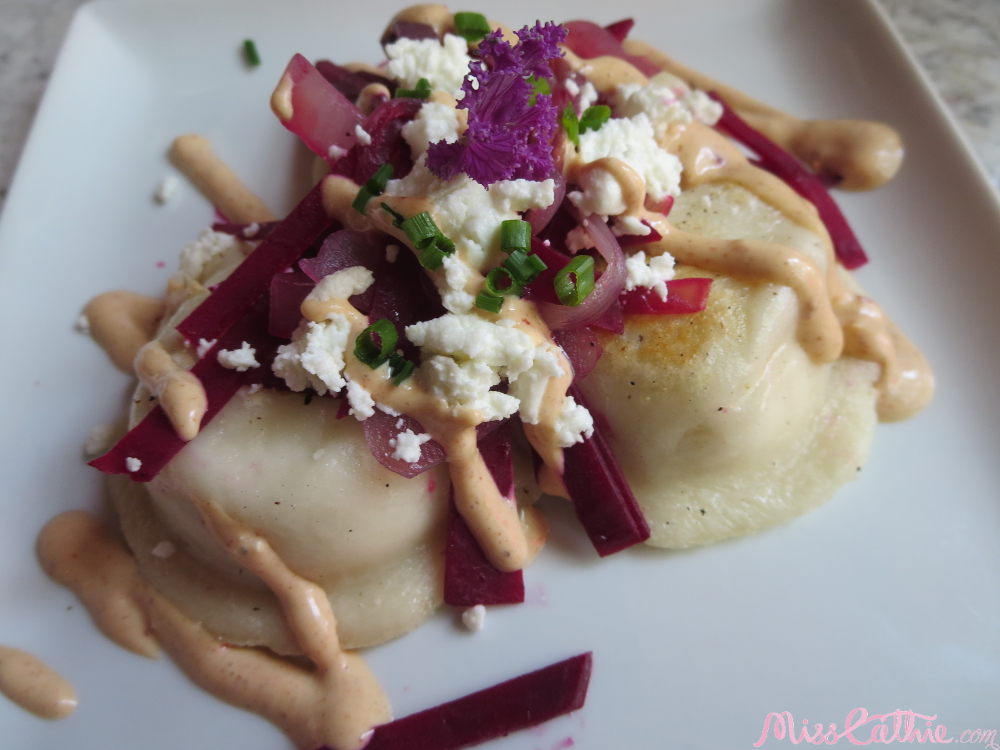 Of course, no expedition of ours is ever complete if it is not rounded off by a handful of gem-coloured macarons.  We paid a visit to Macarons Et Madeleines, and while I wasn’t particularly taken with most of their odd/avant-garde flavour combinations, one of them –an herbal and spice combination– was particularly soothing for my sore throat.  Despite the name, it seems that macarons make up only a very small part of their offerings, sadly.

It was a pleasant time, and I cherished my friend’s visit very much.  If I haven’t scared her away with my predilection for scenic routes, spontaneous capers, and bus stop mishaps, I hope we shall meet for more expeditions very soon!

You may also enjoy:

This site uses Akismet to reduce spam. Learn how your comment data is processed.